People throughout modern history have studied how the body relates to the built environment. From da Vinci’s Vitruvian Man (c 1490) to Neufert’s Architects’ Data (1936) the desire to use geometric shapes to describe the human form and the space around it is evident. The human body and its relation to space create spatial standards, which designers use to construct buildings and interiors.

In 1940, Swiss architect Le Corbusier published The Modular, creating an iconic set of drawings based on measurements for the human body, as well as mathematical models of Fibonacci and the golden ratio. Critics of Le Corbusier’s work take issue with his stiff definition of a person: a six-foot man. In Le Corbusier’s efforts toward standardization he created a disconnect with the reality of the many bodies who inhabit space.

(Left) Leonardo da Vinci’s Vitruvian Man, c. 1490, inscribes an ideal human body in a square and circle; (center) Ernst Neufert’s 1936 Architects’ Data uses geometric shapes overlaid on a figure elevation; (right) is a six-foot man, and is segmented by the golden section. The ratio of the man’s total height to the height of his navel is 1.61, same as the golden section.

The need to understand the human body and its relationship with architecture is the reason why designers keep stacks of Architectural Graphic Standards on their bookshelves. Designers reference these books to understand our own proportions and those of our clients, as well as how we relate to groups and one another in the spaces we design. Many of the group standards that have proliferated our built environment in previous decades directly conflict with our current understanding of safe space in a pandemic; as a result, many office workers are timid to return to spaces which are too dense and feel unsafe. When describing “defensible space,” we think of the boundaries of a built environment that urge users to feel a sense of ownership and responsibility toward their community. These boundaries will be challenged and revised as the workplace responds to new standards of space, and company cultures seek new ways to encourage safety for all. 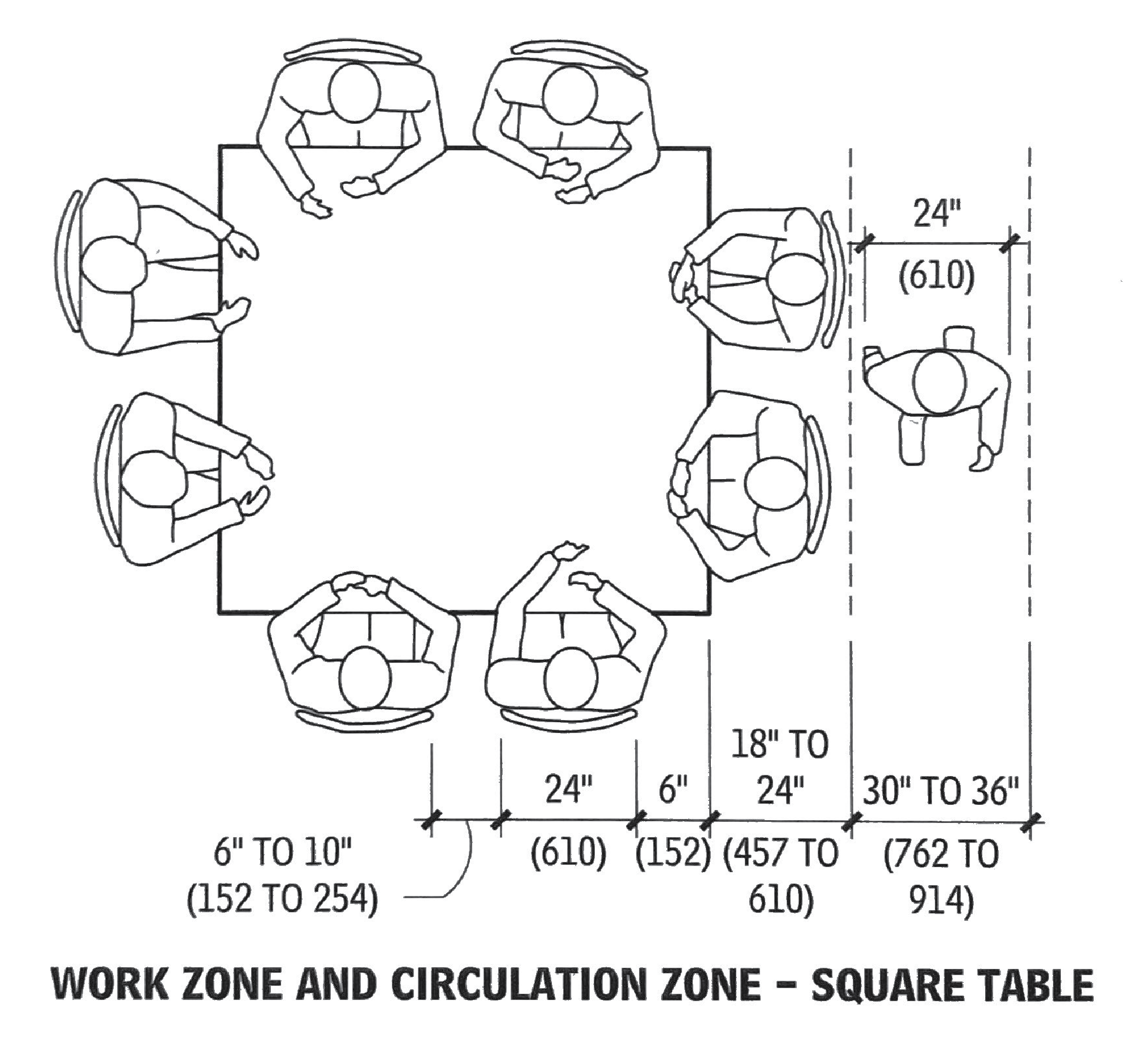 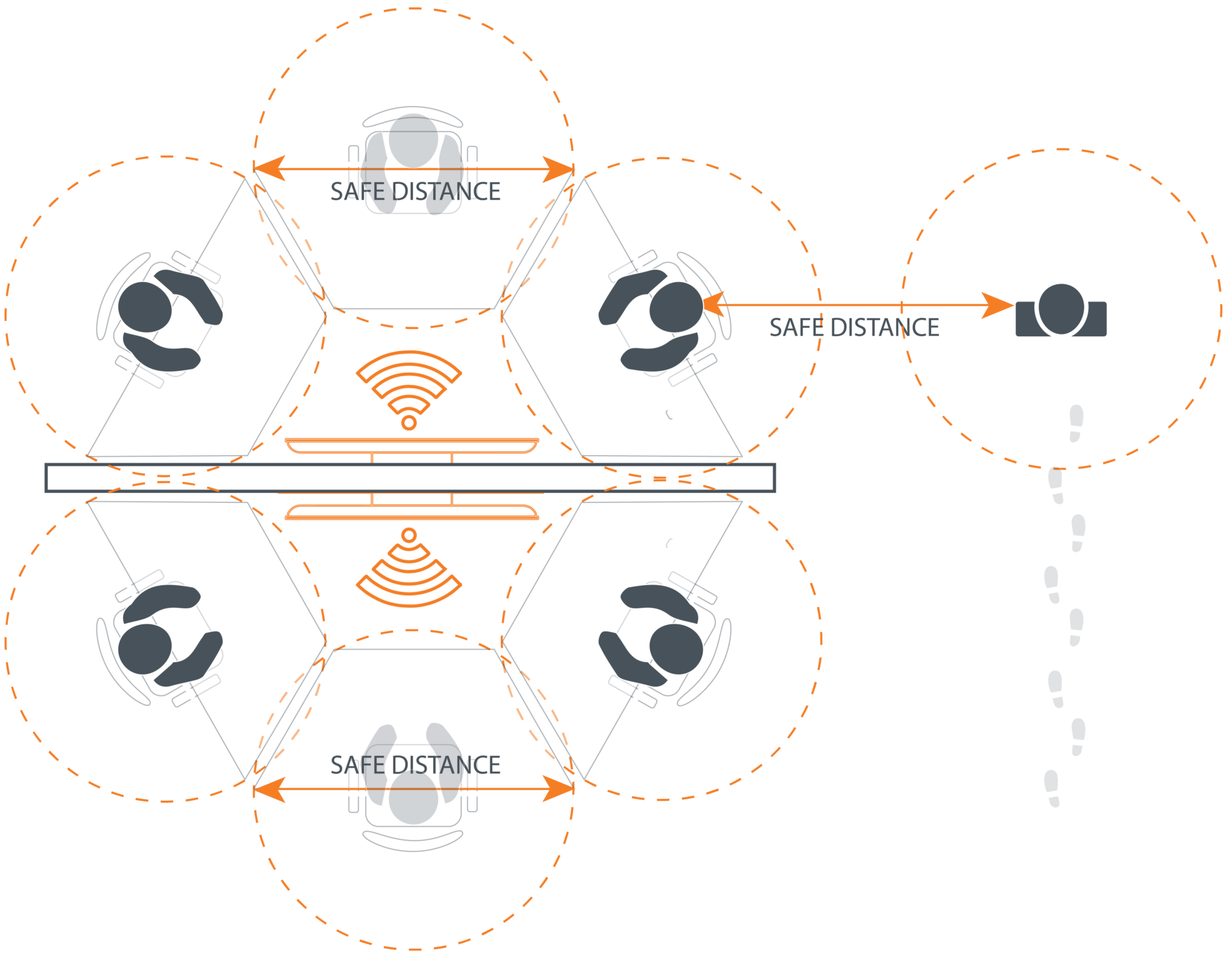 VCs rethinking of the traditional conference table: a standard rectangular conference table becomes a modular hexagonal shape. The modular nature of this layout provides users with graphic cues for maintaining a safe distance. 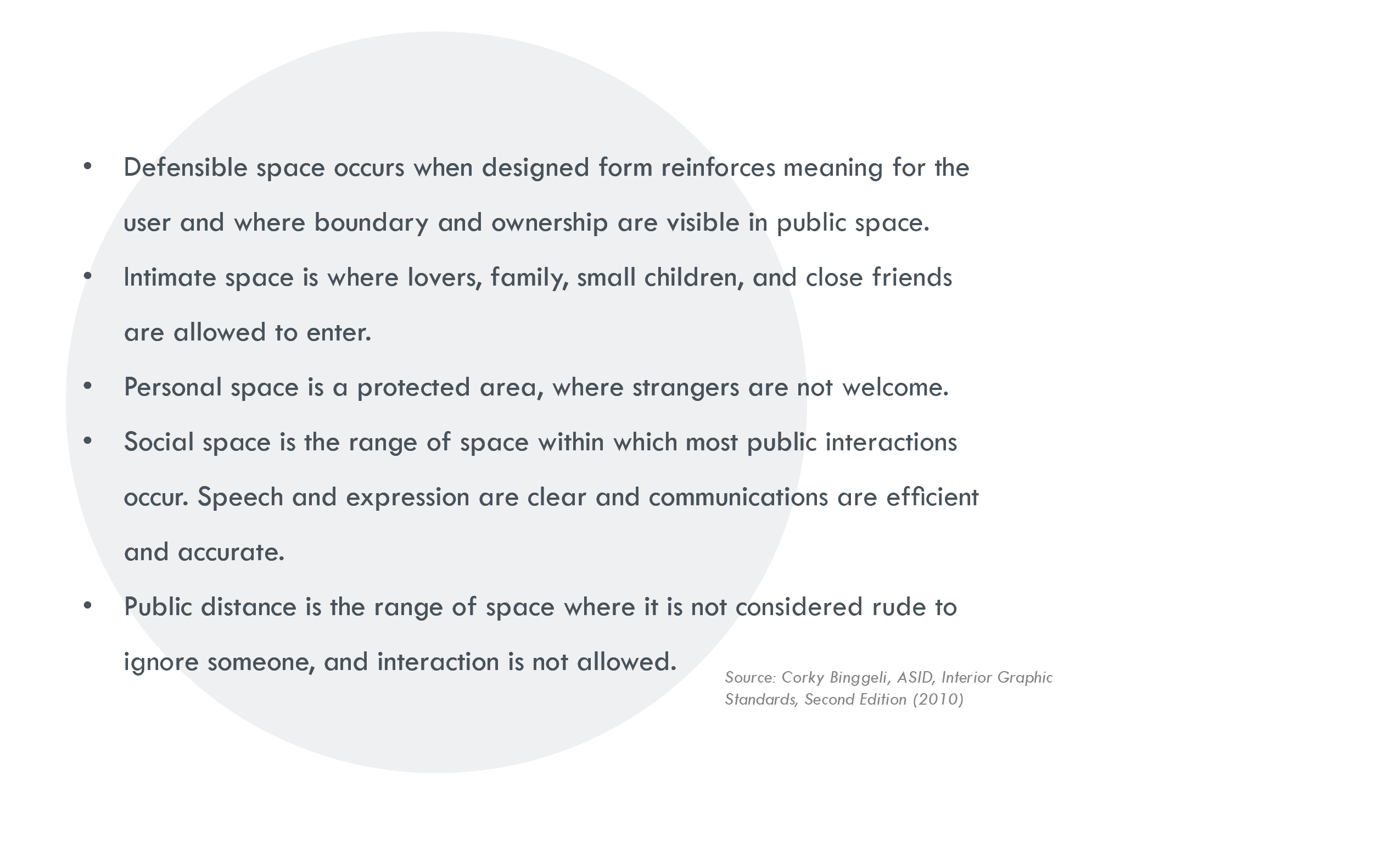 The passing of the Americans with Disability Act led to additional spatial standards to make public spaces welcoming to disabled users. As designers of public space, we are continuously mindful of creating spaces which are universally accessible; the overlay of Americans with Disabilities Act (ADA) Standards for Accessible Design gives our plans and elevations further geometric guidelines as they relate to turning radii, widths, clearances, and mounting heights. As we re-examine how we use space in a post-COVID-19 workplace, new solutions must welcome all users.

An example of how ADA standards assist architects in determining circulation.

In the wake of the current pandemic, architects and designers are working hard to interpret scientific evidence of proper safe distances. This creates a new set of spatial standards with which to work. Notions of “social distance” and “six feet” are part of our everyday, from trips to the supermarkets to daily jogs. As we study workplaces for re-entry, overlaying a geometry of a “safe distance” circular zone across workstations, circulation paths, pantries, and meeting areas helps us determine how to optimize a space during a phased return to the office.

As there is no one-size-fits-all figure in graphic standards, there is no blanket solution for safe distance standards of the post-COVID office. Each floor plan is its own case. Organizations flourish in part because of each unique culture. Remember, “The dimension of human territoriality varies in dimension because of cultural forces” (Binggeli). Allow your return plan to reflect your culture and safe standards, and your people will welcome their return to the office environments where they thrive.

Engineering Controls for a Safer Workplace