Decision fatigue, what is it and how does it impact you during the workday? The term decision fatigue, coined by Dr. Roy F. Baumeister, refers to the deteriorating quality of decisions made by an individual after prolonged mental activity.   The result of continued decision making throughout the day can lead individuals to make poor decisions as their mental fatigue increases. When decision fatigue occurs in the workplace, decreased productivity can be observed. So, the question remains, how can workplace design combat decision fatigue? 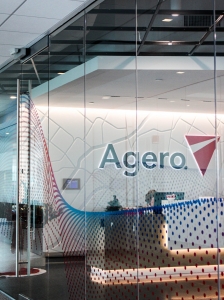 Decision fatigue, in the design setting, is heavily influenced by wayfinding techniques. Have you ever walked into a space and had your first thought be “where should I be going?” This is a small example  of how decision fatigue can take place in the built environment. Those few seconds where the end user must actively think what direction to move in, added up over the course of the day, can impact continued cognitive function. There are a few decision strategies that can be set in motion to clarify wayfinding throughout the built environment. Three key elements that will help aid wayfinding decision making are signage, environmental graphics, and material usage. 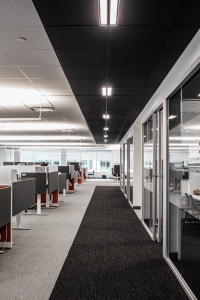 Signage and environmental graphics, achieved through written and visual information, give end users clear direction. This can be as simple as having company branded signage elements on entry doors, or as complex as threading a common theme of environmental graphics throughout the common circulation  of the workplace. The use of graphic elements helps the end user to easily identify a brand and direct then on where and how to navigate the space. 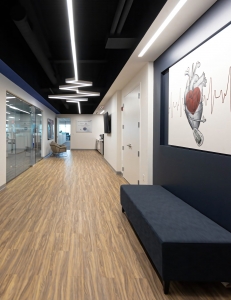 In addition to signage and graphics, transitions in materiality and lighting can also work as a wayfinding queue for users. This can be as simple as transitioning the flooring to create visual separation of open office space to active corridor, or as dramatic as shifting lighting to create a striking visual.

While many strategies can be taken to achieve proper wayfinding throughout the workplace, strong direction queues are the most important. A well-designed office makes decision making easy for the end user. Eliminating small navigational decisions within the workplace allows end users to conserve mental energy, reducing the impacts of decision fatigue.